I have had parts for this for a long time, but finally it is assembled and flying… Here is my simple IOT-device to measure the wood-burning boiler’s smoke gas and water temperatures. Code running on STM32F103 microcontroller receives water temperatures from two DS1820 sensors and smoke gas temperature from K-type thermocouple via MAX6674. ENC28J60 module connects STM to Ethernet, and a simple HTTP server serves temperatures clients. I have Linux server reading values once a minute and store them on MySQL database for later use. There is a simple web page to view the day’s current temperatures and history. This system helps see the system’s status without visiting the boiler room. My house’s heating is all done with that wood-burning boiler, so in cold winter, that means starting fire once a day and adding wood when the fire begins to go out. I can check my web UI to know if my starting fire succeeded and when to add more wood. There are plans of adding some alerts, but that is for a later time. Stuff in the picture: Green board on the center is my general-purpose STM32F103 board(just some voltage regulators, capacitors, and USB-connector, that is not in use on this project). Under that is the programmer board. It is for flashing MCU and is removed when the development cycle is over. Under that is the mainboard that connects all things. The blue board at the bottom is an Ethernet module connected to the mainboard. The metal tube on the right is a K-type sensor, and under that is an LCD for displaying values in the boiler room. I have been doing some welding lately. Here is one project. Google announced that Google code service is ending so moved my project to Github:

So, I wanted to experiment with Mono, Entity Framework, JSON, HTML5, TypeScript and AngularJS. It is still bit open what my site will actually do once finished, but my idea here is create template that allows rapid development of ‘forms’ based applications. I also plan on doing some offline app with PhoneGap. Stay tuned for more. :-)

You can find project at Github code: https://github.com/OH1TR/mobile-invoicing I ended up hosting this site at DigitalOcean. They offer Linux virtual machine hosting starting at $5/month. That is quite nice considering that GoDaddy charges me $8.99 on premium hosting (multible domains).

I like having virtual machine instead regular hosting as it gives more possibilities for configuration and development. I have one C#/Mono/Entity framework/MySQL project in mind that will be installed to this server…

I have been really busy on constructing new silo this summer. I uploaded some photos under projects menu. Take a look.

I been building FPGA development board for SDR experiments. And decided to publish it on Hackaday.io. So there it is, please check it out: http://hackaday.io/project/291-FPGA-development-board.

So, this site moved again. This time one relative of mine set up couple of web servers and I did some configuration on them. I don’t know was that payment or good will, but he let me put this site to those servers. So I am free riding now. :-) I tried to pull Typo3 to new servers but it got complicated when I should have upgraded and moved site at the same time. Also I had some trouble with typo3 previously so, decided to do some extra work and convert all to WordPress. So here we are. If you can read this conversion was success.

I have plans to upgrade layout to something better, but lets see about that one. Year go by so quickly…

I bought new call OH1TR. Maybe dropping that OH1FNJ at some point..

I bought small radio tower at fall. I have been busy with other things, but now I finally got time to pull it up. 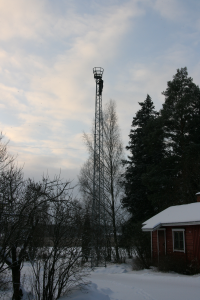 I finally give up to temptation and bought one of these: http://www.esky-heli.com/esky-beltcp-v2-green-6ch-rtf-kit-p-4340.html. I did know it is hard to fly, but it really did come to little surprise how hard it really is. Tried it twice, broke it twice.. :-) Well practice goes on…